Owning a residential rental property can be a lucrative investment, but it also carries with it its share of headaches and worries. Finding a skilled Westfield residential property manager can save you a lot of time and money.

With our full service Westfield property management, you get much more than just one over-worked property manager. You get a full team of skilled professionals with the expertise to provide you with the highest level of service and the maximum return on your investment.

What We Do As Your Westfield Property Manager

WE MANAGE ALL TYPES OF PROPERTIES IN THE Westfield AREA

Our Westfield area property managers will safeguard your property, manage your tenants, and protect your investment, all without you having to lift a finger.

Westfield is a city in Hamilton County, Indiana with an estimated population of 43,649. Westfield is lies within the Indianapolis metropolitan area, bordered by Noblesville, Carmel, and Zionsville. One of the main attractions in Westfield is Grand Park, which is the largest youth sports campus in the United States. Gran Park features 26 baseball and softball diamonds and thirty-one multipurpose fields for soccer, football, field hockey, and lacrosse. In July 2016, and indoor events center opened that features three full-size multipurpose fields, an indoor basketball/volleyball facility with eight courts, two of them being NBA-regulated. On top of that, Grand Park includes an abundance of green space and more than ten miles of pedestrian/bicycle trails, including the largest trailhead on the Monon Corridor. In 2017, Westfield signed a 10-year contract with the NFL’s Indianapolis Colts to host their annual training camp. Westfield is home to 6 elementary schools, 1 intermediate school, 1 middle school, and 1 high school as well as 3 private schools. In recent news, Westfield released that a tech firm is set to bring jobs to the area with their new corporate headquarters. 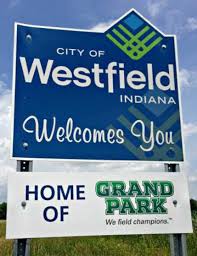