Owning a residential rental property can be a lucrative investment, but it also carries with it its share of headaches and worries. Finding a skilled Avon residential property manager can save you a lot of time and money.

With our full service Avon property management, you get much more than just one over-worked property manager. You get a full team of skilled professionals with the expertise to provide you with the highest level of service and the maximum return on your investment.

What We Do As Your Avon Property Manager

WE MANAGE ALL TYPES OF PROPERTIES IN THE Avon AREA

Our Avon area property managers will safeguard your property, manage your tenants, and protect your investment, all without you having to lift a finger.

Avon is a town in Washington Township, Hendricks County, Indiana, United States and is located West of Indianapolis and bordered by Brownsburg, Danville, and Plainfield. It is home to about 12,446 people according to the 2010 U.S. Census, and up from that to 18,706 in 2019. Avon's public-school system is the Avon Community School Corporation, which is comprised of 2 high schools, 2 middle schools, 2 intermediate schools, and 7 elementary schools, and 2 private schools. Avon has a rich musical tradition, and The Avon High School marching band is well known throughout the country, and was ranked number one in the state of Indiana by the Indiana State School Music Association (ISSMA) seven years in a row (two times in Class B, five times in Class A). Aside from that, Avon prides itself on the preservation of the natural environment and is home to several parks which host annual events such as 5k Races at Avon Town Hall Park, the Angel of Hope Vigil, Concert by the Creek, Movies on the Hill, and a Story Walk Read-A-Long. There is also a community garden, Farmer’s Market, and plenty of retail & shopping. 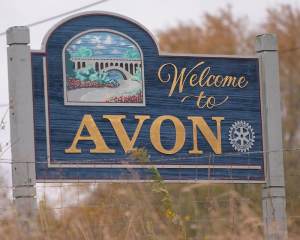